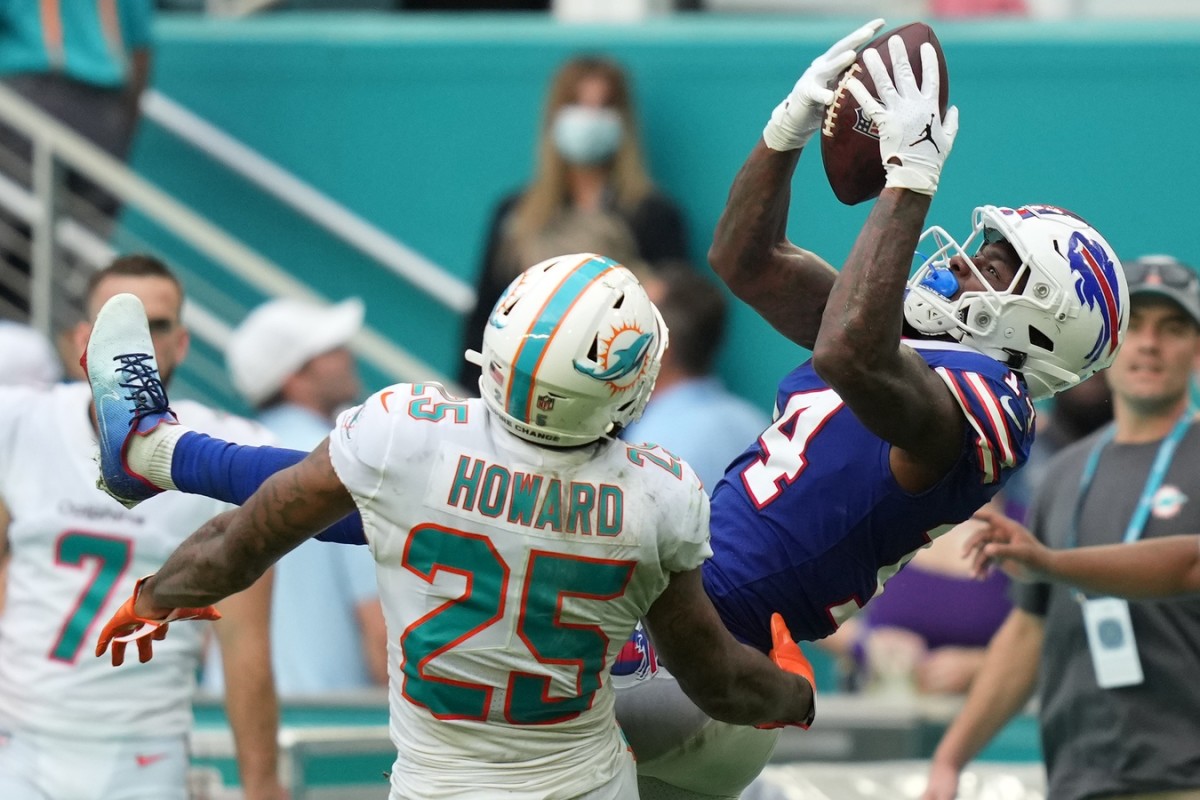 To say the Miami Dolphins’ home opener was to be forgotten would be an understatement given they were on the wrong side of a 35-0 scoreline against the Buffalo Bills, and sadly it was quite an effort. well balanced.

But does one unit fare better than the others? Let’s dive into the weekly report.

Tua Tagovailoa never had much luck in this one because the Bills chased him early and hard. Tua was sacked twice in the first round by bombarding Bills defenders, although it can be argued that he may have shared some of the blame on the former because he held the ball a bit. after Buffalo took away his primary target (DeVante Parker) with backing cover and the blitzer came from his open side. Tua’s day ended when he was planted in the ground by AJ Epenesa as he delivered a fourth pass that was incomplete. Jacoby Brissett didn’t have much luck as he was also under constant pressure. Brissett made some nice shots, especially his first to Parker when he cocked the ball to dodge the arm of an oncoming passing striker, and suffered a few drops. But he gave the Bills an easy interception when he put too much air under a touchdown pass for Mike Gesicki and didn’t see cornerback Levi Wallace ready to pounce on the play. neither good when the longest play of a passing game is 18 yards, although there should have been a 32-yard touchdown for Parker had he not failed to make a relatively easy catch. Rating: C

Myles Gaskin made a truly astute move into the open field on his 18-yard first-quarter run, a game that lasted the longest of the game for the Dolphins. But it was pretty in terms of the highlights. Sure, Malcolm Brown had a 12-yard rush, but it came in the dying minutes with the outcome long ago decided. The running backs didn’t get a good block, but didn’t do much on their own either, with the best example coming when Brown failed to get the opening goal in a fourth and 2 points in the first half. The running backs also appeared to have been beaten several times when asked to protect passes. And to top it off, Salvon Ahmed dropped an easy fourth pass to end the final training. Rating: D

This, remember, is supposed to be a really good group; it was anything but against the Bills. It would be easier to find guys who didn’t drop a pass than those who did, but the only one we could find was Jakeem Grant and he made an expensive fumble after a short reception in the second quarter. On the play before Grant’s fumble, Albert Wilson dropped an easy pass into the flat that would have produced a first down and possibly even a touchdown. And that was on the record when Parker failed to catch the end zone. And Jaylen Waddle had two drops and Wilson had another drop later as well. Preston Williams didn’t have a clean fall, but he also failed to make a contested catch on a fourth and a 2 when he walked his crossing route before the first scorer and he was reportedly tackled short. even if he had made the capture. So, yes, it was bad. Note: D-

Mike Gesicki resurfaced in the passing game after going without a catch against New England, receiving three receptions for 41 yards. He did a good job reducing a few of his holds. Cethan Carter caught the only pass thrown at him, although he landed a big blow at the end. Durham Smythe was not targeted but received a false start penalty. He did, however, do a good block on Gaskin’s 18-yard run. Adam Shaheen caught a catch but was canceled by a penalty. Grade: C-

We could go through anything that’s wrong, but it would take up too much space. Let’s just say it was a tough outing for this group. Austin Jackson, Solomon Kindley and Jesse Davis all seemed particularly fragile in passing protection, although it’s probably fair to suggest that no one has had a good game in that department. Jackson was also reported to have been illegally down the field, while Hunt had two false starts. The Dolphins quarterbacks have been sacked six times and lobbied countless more times, and while not everything was on the O-line, this group was clearly the biggest culprit. And the stroke blocking wasn’t good enough to make up for the lack of pass protection. Rating: F

We’ll start with a general statement on defense and that it wasn’t as bad as the 35 points allowed might suggest. In fact, the defense had several opportunities to come out of the 14-0 hole, although the offense just couldn’t. Emmanuel Ogbah was by far the Dolphins’ most visible defensive lineman, as he finished with three QB hits and shared the team’s lone sack with Andrew Van Ginkel. Zach Sieler also had a solid outing, but Christian Wilkins didn’t make much of a pass outside of a scrimmage pass and Adam Butler was largely a non-factor despite having more snaps in the post. with Ogbah. Nose tackle John Jenkins saw limited action, but he was poorly moved on Devin Singletary’s 46-yard touchdown run. Rating: C

After leading the team with 12 tackles in New England, Jerome Baker had a very calm game against Buffalo despite almost all the snaps, although he forced a turnaround when he released the ball from running back Zack. Moss after a short accomplishment in the first trimester. Van Ginkel was probably the most effective linebacker (two QB hits) because Brennan Scarlett and Jaelan Phillips made little consequence in limited action and Sam Eguavoen had very little playing time, although he forced a failure with pressure. Elandon Roberts also didn’t get as many snaps (19) and it was a game that stood out when he had that nasty collision on the goal line with Zack Moss on Moss’ second touchdown that l ‘left a little pissed off. Rating: C

Josh Allen only managed 179 yards, so it’s not like he lit up the Dolphins’ high school, and Xavien Howard had another fantastic interception. Jevon Holland enjoyed a productive game with a fumble recovery and two QB hits in his second game in the NFL, although he failed to slow Moss down on his first touchdown. Brandon Jones led the team in tackles with five, but got lost in Singletary’s long touchdown run. Byron Jones had a great cover game with two breakage passes. Howard’s second half wasn’t as good as his first, as he was flagged for detention, failed to find what should have been an easy interception, and then gave up on finishing on 41 yards despite a good cover when his misstep held him back. to be able to jump at the right time. Overall, however, it wasn’t a bad performance against a really good passing game. Category B-

Things didn’t start well for the Dolphins, who gave up on a 20-yard return after a 48-yard punt from Michael Palardy after their first practice. The other notable play, of course, was Jaylen Waddle’s fumble when he missed a punt, recovered and then lost the ball when it was tackled. The only good play on special teams was Jakeem Grant’s 31-yard kickoff return, but as he lined up the ball 5 yards deep in the end zone, the Dolphins only got the ball. ‘to their 26 instead of 25 for a touchback. Jason Sanders was not used outside of the second half kick-off, although it is questionable why the Dolphins did not have him attempt a 56-yard field goal attempt at the end of the first half instead of kicking Buffalo 38. Rating: D