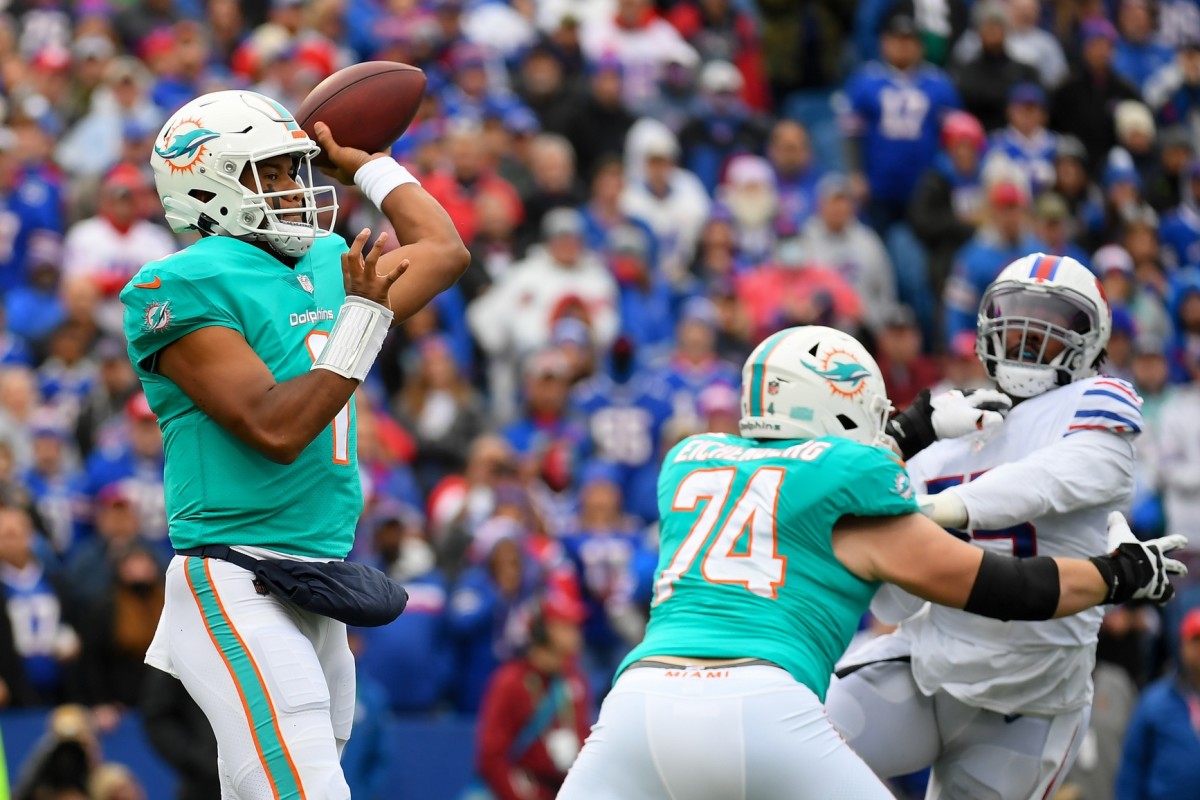 The Miami Dolphins’ losing streak goes to seven games on Sunday with a 26-11 loss to the Buffalo Bills at Highmark Stadium.

Here is the weekly breakdown of the performance of each group of positions:

Tua Tagovailoa failed to put in three good straight performances against Buffalo’s very good defense, although it’s clear he didn’t get roughly the same kind of protection as against Jacksonville and Atlanta. For his part, Tua made some nice shots, especially on the quick obliques, but again, there just weren’t enough shots in the field. Tua finished 40 yards to Mike Gesicki on the fourth down, a nice 50/50 pass to DeVante Parker near the sideline, as well as his second effort on his touchdown, but the 58.2 pass score didn’t stand out – although we won’t hold the interception against him because the Dolphins weren’t in desperation mode at the time. Defeat certainly isn’t on Tua’s shoulders, but it’s also fair to say that he didn’t do much to help the Dolphins secure a victory, either. Grade: C-

Myles Gaskin looked like he was heading for a productive day with the ball when he gained 23 yards on his first five rushing attempts, but it was 12 yards on his last seven carries. Granted, the Bills’ offensive line and defense played a part in this, but Gaskin and Salvon Ahmed, once again, haven’t done much on their own. Ahmed had a nice 12-yard run when the Dolphins were pinned near their goal line, but that was about it for his contributions. Patrick Laird had a catch for 10 yards in limited action and had another nice gain on a pass canceled by a penalty. Grade: C-

As we mentioned in our weekly snapshot count analysis, it was pretty much the Parker and Waddle show and the results were mixed. Parker was clearly the best offensive player for the Dolphins, finishing with eight catches for 85 yards, although his failure ended on a bad note when he dropped the last pass he got his hands on. It wasn’t a productive day for Waddle, who only caught four assists despite being targeted 12 times and once again limited himself to short wins (7.3 on average). Isaiah Ford, Mack Hollins and Albert Wilson have all had so few offensive snaps that it’s not even worth mentioning. Grade: C-

Mike Gesicki stood out again in this game, but this time for the wrong reasons, even if it wasn’t necessarily his fault. Gesicki was on the wrong side of the game’s most notable game, the blooper-worthy fumble when the shotgun hit hit him in the chest while he was on the move. This was just one of three instances where he was involved in massive miscommunication prior to the snap, although, again, the finger should not be pointed at him for these errors as these were ‘a group “effort”. Gesicki had the 40-yard reception on the Dolphins’ lone touchdown and managed the two-point conversion in the fourth quarter, but he finished with just three catches after getting eight each in the previous two weeks. Adam Shaheen only managed one catch, although he did manage a good dive, and he also did good blocks in the running game. Durham Smythe didn’t get a lot of shots and wasn’t really noticeable. Rating: C

So much for the obvious progress we have seen. Pass protection again had obvious issues against the Bills, although it wasn’t as bad as it was in week two. Liam Eichenberg and Jesse Davis struggled with the speed the Bills can bring from the rim, and Robert Hunt mysteriously failed to block Ed Oliver on a play where his immediate pressure forced Tua to simply throw the ball away. Besides. Hunt and Eichenberg have each been flagged for a false start. The race block was good at the start of the second quarter, but it really faded away after that. Rating: D +

Christian Wilkins continued his strong season, finishing with two tackles for a loss and a pass defended when he slapped Josh Allen’s arm to the side during a pass rush. Zach Sieler came out on top when he tackled Zack Moss for a loss on a third and short, leading to a Buffalo punt in the first half. Emmanuel Ogbah had a rather calm game, although he almost had an interception when Allen threw the ball directly at him as he tried to throw it under pressure. The Dolphins pretty much contained the Buffalo running backs, although Allen did some damage with his jamming. There was very little pressure applied without a blitz, and it remains a major issue for the Dolphins’ defense. Rating: C +

With Jerome Baker sidelined with a knee injury, Duke Riley played most of the game after being primarily a special teams player this season and made five tackles, although he only had no notable play. Likewise, Jaelan Phillips was credited with four tackles in total, but was not a factor despite many clichés. Brennan Scarlett had very limited action in defense, but made two saves in the running game, including a tackle for loss. Andrew Van Ginkel lost control over Allen’s touchdown run at the end of the game (it was over by then anyway) and had the costly defensive pass interference penalty on the second touchdown. of Buffalo when he collided with tight end Tommy Sweeney in the open field. Elandon Roberts had a quiet game; he missed a tackle on Allen behind the line of scrimmage on a third play, but we have to be fair and stress how difficult a play was for him. Grade: C-

It was a two-half story for the Dolphins’ defense, and it certainly applied in high school after Allen came up for just 80 in the first half but 159 in the second. The biggest problem was covering slot catcher Cole Beasley, which has given Nik Needham and Justin Coleman all kinds of trouble in the last two quarters. Xavien Howard didn’t have his best game either; his soft cover allowed Stefon Diggs to easily gain an inside position on his 19-yard touchdown and Howard was also flagged for detention. Brandon Jones was very active as a blitzer and was credited with two quarterback hits. Byron Jones had a very good first half. Rookie Jevon Holland played every snap in defense, but was not at all noticeable. Rating: C +

Jason Sanders continues to have an inconsistent follow-up of his 2020 All-Pro season. He was 1 for 2 on field goal attempts against the Bills, missing 36 yards into the wind before making a successful 51 yards with the wind. . In a game where the score was tied 3-3 at halftime, the missed basket was obviously important – even given the final (unrepresentative) margin of 16 points. There haven’t been many memorable special team games (outside of the Bills’ punt, they recovered in the end zone for a touchback). Michael Palardy had an impressive 51.8 average on five punts, but the net was only 38.8 on two touchdowns. The Dolphins gave a 16-yard punt return to Isaiah McKenzie. Rating: C