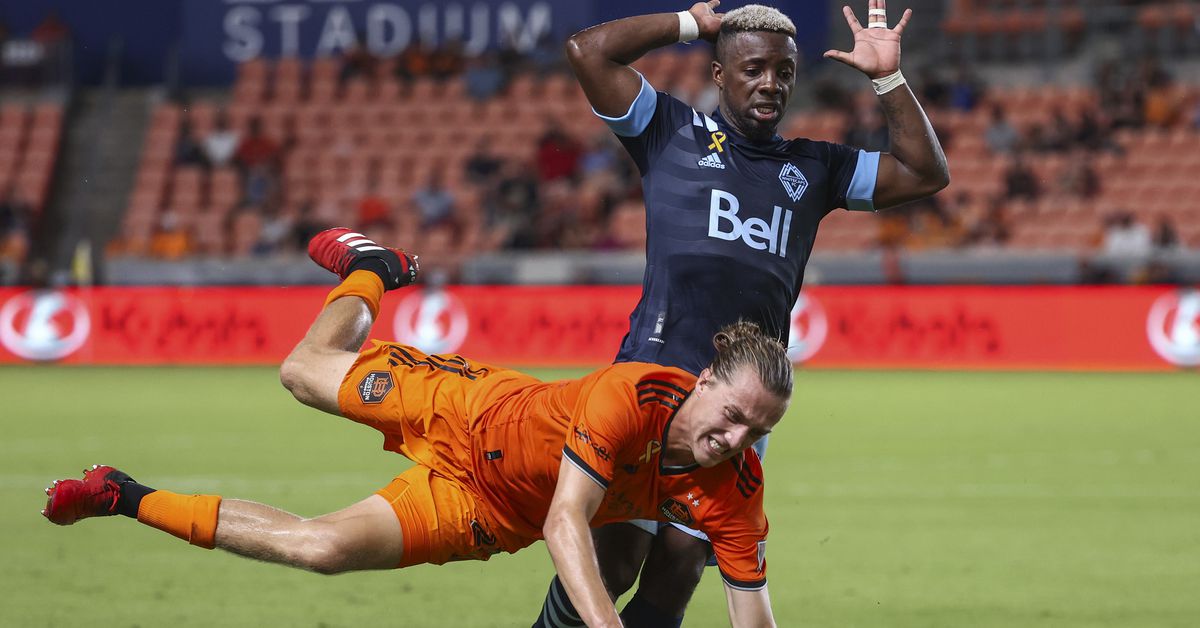 Historically, road trips to Houston haven’t been easy for any MLS team, especially the Vancouver Whitecaps.

Considering the club’s recent record of recording just one loss in their last fourteen games, was it so unreasonable to think that the Vancouver Whitecaps could have somehow taken the three points from the Houston Dynamo on Wednesday night? Turns out it was, but without the ‘Caps leaving empty-handed.

If anything, Wednesday night again suggested that there is a third fatality beyond death and taxes: At one point or another, your team is going to lose points at the BBVA stage.

A team can go to Houston, play well and come away with nothing. That’s the bizarre nature of the game in MLS, just as it’s equally bizarre for the Whitecaps to play “just good enough” and escape BBVA with a point. But points are points, and in this race for the playoffs, every one of them is crucial.

It only remains to throw a quick review to the players. As usual, a score of 5 is as average as the average gets. Like a security guard who is simply asked to “watch and report”, but not like the security guard in the movie Observe and report. This guy was just goofy and cranky.

Well, Crepeau did it again, but rather than just one clutch stop to end a close win, it was four big saves, each more difficult than the next, split to save a draw. He benefited from an indulgent rebound off the post, responsive clearance from Florian Jungwirth on a reverse rebound and Houston’s lackluster finish, but Crepeau kept the Whitecaps in this one to earn a tough point on the road. .

The best of the three holders on Wednesday. His positioning looked good, he was strong in the tackle and luckily did not follow Fafa Picault on a run that could have scored a winner, but was rather an obvious offside.

Keep in mind that the next line is mostly from my Spidey-Sense ™ ️, but I also felt that Nerwinski was doing a good job of communicating with the winger in front of him, whether it was Patrick Metcalfe or Javain. Brown on the occasions when they changed sides. Whoever ended up in front of Nerwinski was often in a better defensive position than his counterpart on the other side. My defensive guts tell me it has to do with Nerwinski’s constant communication to players in front of him.

Before Wednesday, I kept seeing murmurs online alluding to Baldisimo’s brief mid-back experience. Looking back, I would like to have the means to verify these sources. While I absolutely admire his willingness to get involved when the defensive core was so spread out, his time on the backline was a waste.

I imagine Baldi’s goal was to spray passes from the back like he’s always in the center of the park, but he never really got the chance, did he? Playing in the back with precision is a well-deserved luxury.

Instead, Baldisimo found himself in situations where, for example, a cross ball unexpectedly bounced off his head or a missed clearance from a bike kick just inside center would almost turn. in a clear escape. The ball was never “his” to play.

Once the halftime replacements were made and Baldisimo was able to move to the central midfield, he looked calmer, despite his passes that were a little too sideways.

Unlike Nerwinski, I didn’t have the same sense of Rose’s “winged communication”. In all fairness, Brown was a lot more adventurous on the court, but it was the bunker moments where things got problematic.

Whether it was Brown or Metcalfe collapsing as they should, it seemed neither of them were getting advice to shut down an attacker until it was too late. Normally it would make sense to call the winger for reacting badly, but those bad reactions were mostly happening on the right side, ahead of Rose. This is all speculative, of course, but it seemed to make sense.

Otherwise, as usual, an Andy Rose by another name would always block everything in front of him, have no problem hitting a ball under pressure, and become indecisive with time spent on the ball.

To be completely honest, I was happy to see Metcalfe take the start, if only for the show of confidence Vanni Sartini has in the young winger. Under any number of previous Whitecap schemes, the foul he made at the end of the Dallas game would have buried a young player deep in the bowels of WFC 2, or perhaps under UBC turf. So seeing Metcalfe step into the starting XI on Wednesday was heartening.

Having said that, I don’t think he played like he knew the skipper had confidence in him. He had one of the highest success rates of the night, but it was all safe and upside down. He was hesitant both on and off the ball. If only you could bottle the advantage Janio Bikel is playing on, filter out the fouls, and sell it to hesitant players like Metcalfe.

Owusu was decent to break up plays in the middle, but offered little to move the ball around the field. I don’t care if you’re CM or DCM, 22 touches and 17 attempted passes aren’t enough when you’re in the middle of the park. Find ways to get involved!

As mentioned, Bikel played with the kind of edge Metcalfe needs, but it almost bit his ass.

I naturally held my breath hating VAR at the end of the first half, some Bikels needlessly cut off (I think) Darwin Quintero’s heel as the forward entered the penalty area. Fortunately, nothing came out, but yuck.

Aside from moments of high heart rate, like Owusu, Bikel helped defensively but offered very little as he advanced onto the pitch. I think I counted maybe three progressive passes from Bikel in the Dynamo half. And like Owusu, 24 touches and 16 passes just aren’t enough, especially when you can’t connect with your attackers.

Javain himself had a better night than OK. Statistically speaking, he was the most active defenseman, scoring a record of three tackles, two interceptions and two clearances, while winning seven duels, in addition to making one of the Whitecaps’ three key passes on the night.

It was maybe just a little too aggressive trying to get on the field offensively, but still covering up and coming back quickly. At one point suffered from classic Whitecap Wingback narcolepsy on the back post, but luckily it didn’t help.

Raposo was aggressive enough towards the press, but his offensive contribution was generally absent. He was supposed to be the “1” in 3-4-1-2, but never really found a way to fit into the attack.

Raposo had the fewest touches of any player in the first 45 and, if you look at the league’s passing network for the game, he’s the only one that doesn’t have a real passing channel. Is it a case of not reading the room and not opening? Being bypassed for other options by those holding the ball?

The appearance of Deiber Caicedo in the second half allowed for a good connecting game between the two during the thirteen minutes before the replacement of Raposo.

Knowing that Cavallini came out at halftime due to a knee injury could be the caveat behind a moderate performance, but it was moderate nonetheless. On the balls played at his feet his distribution was creative, but everything he was played in the air on Wednesday was lost.

Dajome was weird for me on Wednesday. You could tell he wanted to put in a big effort by the way he helped defensively, making two tackles, two clearances, two interceptions, two digs, one blocked shot and having won nine duels.

All this despite the yellow card he received, which could very easily have been matched on more than one occasion. Despite what the stats say, it looked like Dajome was arguably a borderline liability, which isn’t something you would expect from your top scorer.

At that last point, I really hope he can find his offensive foot in this final streak of games.

Substituting Owusu at half-time in a three-player switcheroo, Jungwirth immediately got to work.

The guy had 11 clearances and he only played half! To be fair, that high number probably had more to do with the fact that Vancouver never retained possession of the ball until Houston over-force their counterattack, but he pulled them off! Brought some stability down midfield, even as Houston stepped up efforts to secure a winner.

For Metcalfe at half-time, Caicedo was dynamic to get the ball back up the field. The only problem: This rarely happened, as Vancouver continued its inability at night to make its way through the field in any meaningful way.

Substituting Cavallini at halftime, White did well to show the ball when he could. But with the Whtiecaps’ inability to constantly threaten Houston’s penalty area, it was as if White showed up for work when the office was closed.

Replacing Raposo in the 58th minute, Gauld quickly caught up with the space game that the Whitecaps lacked offensive.

Of course, his appearance alone wasn’t enough to make this game seem more of a missed opportunity for Dynamo than Vancouver, but Gauld’s ability to move and play the ball in space provided. moments of optimism. Heck, he even recorded the Whitecaps’ lone shot at the net, even though his 35-yard loop volley was comfortably in the hands of Michael Nelson.

For Bikel in the 75th minute, Teibert did his usual hard defensive work, with intelligent positioning and pressure, although, as is usually the case, his best offensive efforts came from disrupting things defensively. He nevertheless helped put the finishing touches on a hard-earned point.

I think it’s clear that Max Crepeau was the man of the match in this one, but who else had his highlights? What changes need to be made before the weekend tour of San José?