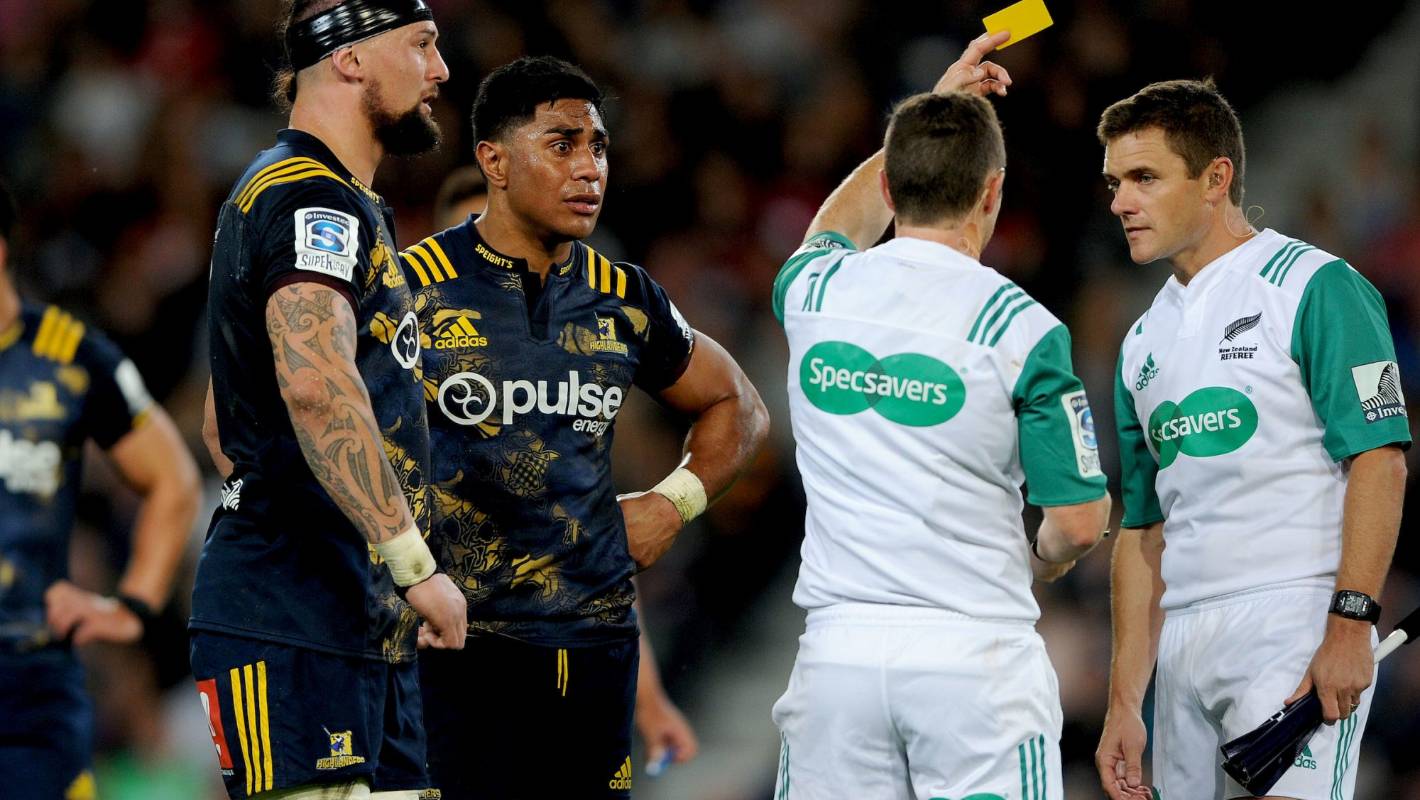 Are too many yellow cards depriving rugby fans of a competition?

OPINION: Rugby authorities should seriously consider adopting the rugby league “report” system to prevent competitions from being decided by yellow or red cards.

Rugby fans get ripped off by too many unequal competitions.

Would the Crusaders have scored those two late tries against the Highlanders in Dunedin on Saturday if Malakai Fekitoa hadn’t been given a yellow card after an aerial challenge?

It was difficult to argue with Highlanders coach Tony Brown when he called referee Paul Williams’ decision a “massive moment”, which “probably won them the game in the end.”

The Crusaders were also the beneficiaries in the first round, scoring a crucial try in a 17-13 victory over the Brumbies after Australia winger James Dargaville was yellow for knocking out Israel Dagg in the air.

The Blues’ hopes of upsetting the Chiefs in Hamilton were dashed when Steven Luatua was sent off on the stroke of half-time for a high shot out of the ball, leaving Tana Umaga’s side to play the final 40 minutes with 14 men.

Luatua’s reckless act was in a different category from the two aerial incidents, which essentially boiled down to the judgment of the match officials.

But the effect was the same.

Football featured many victorious efforts from teams of 10 players.

Any rugby team reduced to 14 men for 10 minutes – not to mention 20 or 40 – however, faces an almost impossible task. Sisyphus would have had more of a show rolling the Moeraki Rocks on Kilmog Hill than a 14-man rugby team has to defend their line against 15 fiery opponents.

Isn’t the “on report” procedure launched by the LNR a better and fairer system? The disbelievers of the rugby league are not, on the whole, condemned or expelled. The arbitrator simply raises his arms to indicate that the offender is “on report” and leaves the ultimate sanction to the judiciary of the NRL.

Critics might say he is a cop allowing umpires to hit to hit and return the ball to higher authority.

In fact, it conforms to the principles of natural justice. Not all rugby union or rugby union players are guilty.

Postponing the decision to the judiciary allows time to analyze the tapes from all angles and gives the accused the opportunity to present evidence.

It would have been fairer, in the cases of Fekitoa and Godwin, for the justice of Sanzaar to rule on the recklessness of their aerial actions.

They could have been placed “on report” and the matches could have continued in the form of competitions at 15.

Alternatively, if the rugby authorities decree that offenders must be punished immediately, why not introduce a system allowing the replacement of a sinful player?

This would preserve the integrity of the 15-man contest while providing a consequence.

There must always be a sanction for malicious acts or brutality.

But why can’t a red card player be replaced? His team would still be punished to the point of exhausting their roster for the last important quarter, but we would be spared an imbalanced competition.

Should his 14 teammates, coaches and supporters be punished for a moment, madness or indiscipline of an individual?

We could have teams that miss a spot in the Super Rugby qualifiers, based on a referee’s judgment.

This could result in the loss of their jobs by the coaches.

World Rugby’s campaign to end high tackles and reduce the risk of concussion is commendable. Player safety is paramount.